It’s 4.40pm on Friday 15th June 2012 and it is at about this time I had planned to be heading down to the Trent and getting ready to start a weekend session at midnight, however I am currently looking out of my living room window at the monsoon that is happening outside. Watching the weather forecast earlier the country is about to be hit apparently by a ‘once every 50 year’ storm. It’s not a last minute cancellation to my plans, I knew earlier in the week that this was coming and had called off my weekend away on Tuesday. However all is not lost, the weather looks a lot better from Monday so I will try to grab a couple of days on the bank next week when hopefully the river level will be dropping and conditions should be spot on.

SO WHAT HAVE I BEEN UP TO LATELY?

Well I have spent numerous days of the closed season on the banks of the Trent on both the tidal and non-tidal stretches armed with a rod with a 5oz lead finding new spots and getting the depths of swims from the far bank right to my feet. Due to my limited mobility and the fact I can’t walk far my aim was to find places where vehicular access is essential so I am parked close to where I fish, and surprisingly I was pleased with the amount of places I did manage to find. So I have quite a few places I can target but I am going to concentrate on just 2-3 so I can try to master them.

I said in my previous blog I am going to be working on making my own bait for the upcoming season and so far I have enjoyed every minute of this. After hours of stinking the house out and behaving like a mad alchemist on a mission I am really happy with what I have made so far. As you can see from the picture below my cupboard resembles Jamie Oliver’s pantry but with different flavours, oils, colourings, base mixes and other dry ingredients and the picture is just a small selection of what is in there. 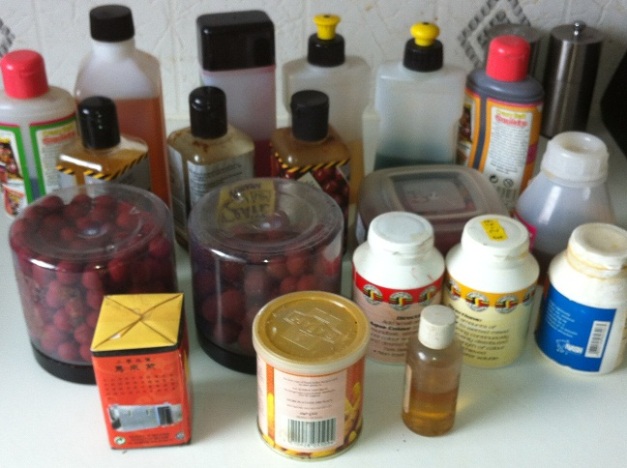 Just Some Of The Ingredients I Have Been Using

I have made 2 base mixes so far that complement each other in terms of flavours, colours and feeding trigger ingredients that I hope will be successful. One base mix is my hook bait mix for making boilies, sticks, sausages & paste and the other is similar to a groundbait/stik mix used for binding particles in the feeder and PVA mesh bags. Through experimenting I found that my hook bait mix was spot on if I used 8 medium eggs with 100ml of flavour/oil/colour per 500g of dry mix for making the boilies, sticks & sausages and throughout the summer I will be making my paste on the bank with river water along with my chosen flavours, oils and colours as I want this to break up fairly quickly from around my hook bait. In the winter I will mix it at home with egg for a slower breakdown as I won’t be putting anywhere near as much feed in so the attraction around my hook bait is there for longer. 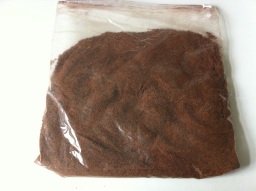 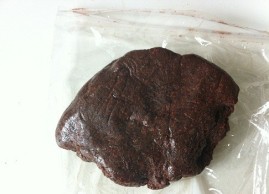 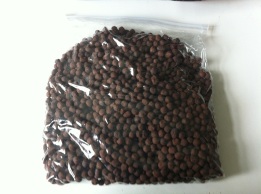 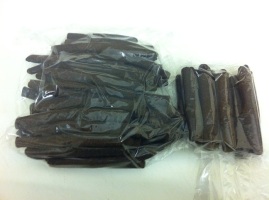 As you can see in the above pictures you can see my base mix, particle boilies (8mm), sticks and sausages. The particle boilies will be used whole and broken up with my Krusha and be part of the particle mix I will be using through the feeder. The sticks and sausages will be my main hook baits to be broken up and fished how I want. I have also come up with 4 different hook bait glugs by mixing different flavours and oils and will be testing these out too, you can see below the sausage sections I have been glugging ready to test in upcoming sessions, whether they will work or not I have no idea but I am looking forward to finding out. 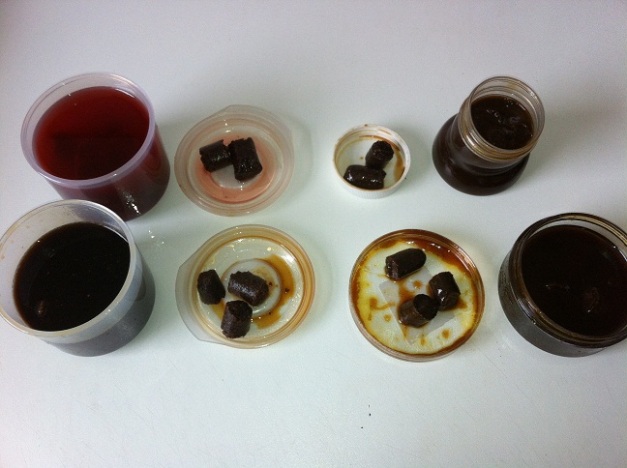 I have decided to stop team fishing and will not be fishing for Clay Lane this year. There are a couple of reasons but the main on is my health. My mobility sucks due to my back and knees and this along with a heart murmur I have means there is no chance of half mile walks up the towpath with my gear. The second is it could be awkward as I don’t see eye to eye with 1 of the members. However this said the team consists of a cracking bunch of lads who I wish all the best for and hopefully they can have another good season. I have told the captain that even though I won’t be fishing for them I am more than willing to help in terms of passing on information about how venues they will have matches on are fishing if I have been on them.

It’s finally happened, 2 long months after the end of the season when other clubs have already done lots of business we have finally made our first signing, welcome to Doncaster Rovers Dave Syers. Yes like I was I bet you are thinking ‘who?’, because unless you look into things a little then from the outside it looks like a free transfer of a player nobody has heard of from a team that has struggled at the wrong end of league 2 for a number of seasons (Bradford City). However reading their fans forums it seems the majority are gutted he’s gone and that he was their best player, so hopefully he can bring something to the club. What has pleased me is some of the things he has said…..

“I came down here and met Dean, and ever since then there was no looking back,”

“It’s an unbelievable club and Dean Saunders really sold it to me, after the meeting it was a case of when could I sign rather than if.

“Obviously relegation last season is a disappointment, but speaking to Dean you can see the passion and the idea’s he has – I just can’t wait to be a part of it.” 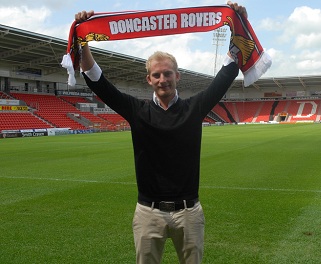 On Monday evening I will be at the clubs ‘Forum For The Future’, where Rovers Chairman John Ryan plus other major shareholders will be in attendance giving all Rovers fans the opportunity to discuss the club, the plans to rebuild the first team for next season and the commercial and community projects that are being planned for the future.  I hope there is some transparency from the club into why exactly Dick Watson & Terry Bramall have decided to return to the board of directors, if the club don’t say why then I hope fans ask why. Last season the pair of them along with 2-3 of Dick Watson’s family members couldn’t get out quick enough and were seen by most as rats deserting a sinking ship, now it seems they want to return in a blaze of glory and will no doubt be promoted by the club as returning saviours. I however am very suspicious regarding their return for a few reasons and I also have my opinions why they have decided to come back. Some thing’s I would like to know publically are:

This is just my opinion, but I believe the only reason they are back is to make money, but not directly from the club, maybe I’m wrong but I guess we will see over the upcoming couple of years. How are they going to do this? You are asking, well I’m sure I read in the agreement between the club and the council that the club can develop and expand on the site with permission from the council. Now it doesn’t take a genius to work out the potential to possibly make a lot of money from this, after all 2 clubs local to us (The Blades & Leeds) have themselves developed on their sites in the building of hotels, could something like this and other potential money spinning developments be what Mr Watson & Bramall are really returning to the club for? Who knows? But as Roy Hodgson said recently I don’t think they have returned for “footballing reasons” but time will tell and maybe I am wrong, we will see.

One thing that doesn’t get mentioned anywhere that is also a worry of mine is the power these 2 actually have at the club. Between them they own roughly 66% of D.R.F.C. and between them can do what the hell they want and John Ryan can do nothing to stop them. In fact between them they even have the power to vote John off the board, now that is a scary thought for many Rovers fans.

Well we’re around a week into the feast of football so far and we have seen some cracking matches so far. The best so far in my opinion was Poland v Russia, so much national pride and passion for all to see, it was just a pity that this also meant that there were some dreadful scenes outside the ground both before and after the match.

Having seen everyone play so far I think Germany will win it. They look awesome to be honest but I’m not surprised with some of the players they have. They have a lot to thank Jürgen Klinsmann for, he revolutionised the way they play and introduced the world to a German side that do also have some flair about them and his work has been continued by his then assistant Joachim Löw.

As for England, well yes there were times against France we looked good but to be honest we did scrape a point. Yes it was a fantastic point but in all honesty the French battered us in terms of possession and attempts at goal and we were hanging on for dear life at the end. We remind me of the way Italy used to play years ago, very defensively with the only difference being that we aren’t as good. I just wish we showed some flair and had some idea how to attack and break sides down but sadly we don’t at the moment. Hopefully this can change when we kick off against Sweden in about 30 minute’s time.

WHATS COMING IN MY NEXT BLOG?

When I write my next blog in a week or two I will revealing everything about the sessions I have on the Trent, hopefully my baits work and I will have some cracking photographs to upload too.

I am also fishing a private lake next Friday and will be posting about that along with all other sessions I hopefully have the chance to fit in.

I’ll be discussing what happened at the Rovers forum and also any other news in regards to signings etc.

And finally I would love to be writing about how England won the Euro’s playing some wonderful expansive football, but I doubt I will be hehe.

Until then, tight lines.